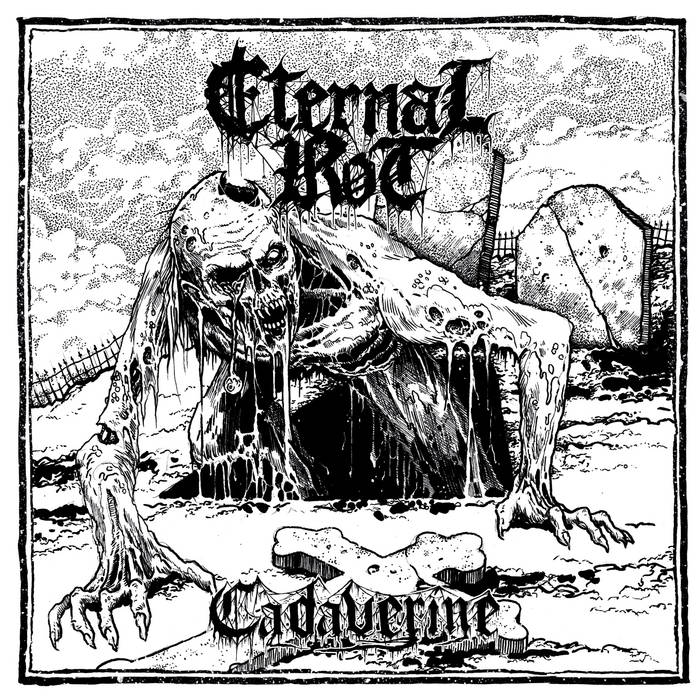 Lord Eddard of House Flanders How can something so filthy sound so clean and crisp. This shit is drenched in slime Vocals by c.h.u.d.. Total eargasm. Favorite track: In Their Decaying Eyes.

Markus Schmidt Eternal Rot plays a truly filth-ridden death metal combined with graveyard-worthy doom metal. The whole record makes me feel like lying buried in a grave, six feet below and there is no way to escape the moldy rotten stench! Favorite track: In Their Decaying Eyes.

"Cadaverine" was conceived in torment between 2013-2018 in the tomb of Eternal Rot.
Mixing and mastering by Haldor Grunberg at Satanic Audio.
Intros and outros by Zenial.
Artwork by Mark Riddick.
Typesetting and layout project by Paweł Ozon.
Band logo by Radek Pierściński.
Album title logo by Paweł Martowicz (Nuclear Tattoo Sanok).

After a five-year-long hiatus during which the band did not apparently perish in the swamps of mouldy and slugdy death metal, Eternal Rot start where they left off with the Promo 2013. Aptly titled ‘Cadaverine’, the album features a four tracks and almost 30 minutes of filthy and dirty, slow to mid-paced hymns of doom and death. Gnarly and slightly distorted vocals, down-tuned guitars and gut-wrenching bass parts, all based on solid drumming, is everything a die hard fan might expect... The horde crawl out of the tomb they have dwelled for the past five years, offering some organ crushing, mind blowing and sickening metal of death stripped to the bone. A true must for any fan of old school masters.