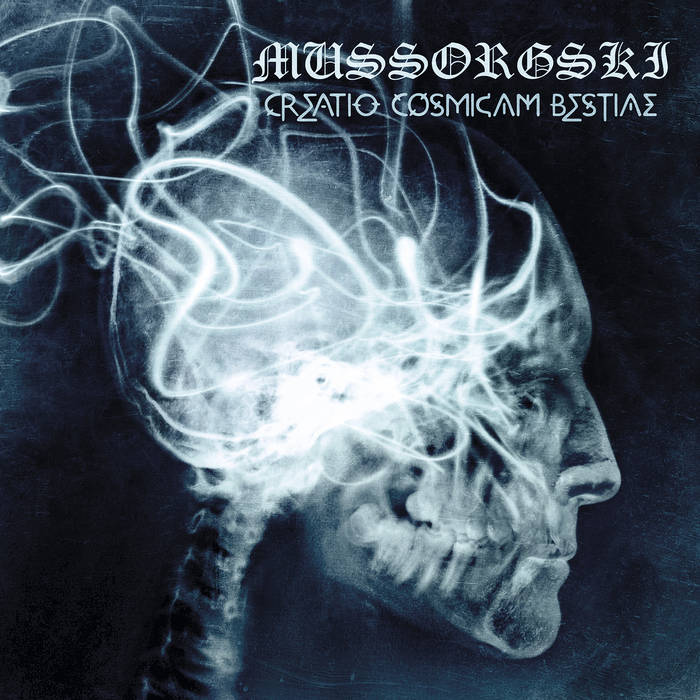 How…? What the..? Where did these guys come from? Ok, ‘this guy,’ more accurately. And the short answer is ‘Poland’ but that’s the answer to a lot of other questions too and the word ‘Poland’ is not really going to explain much about Mussorgski. At its most basic level this is sleekly-produced extreme metal – mainly death metal and doom – heavily laced with layers of ambience. But Mussorgski is much more than that would imply and it works on a grand, harmonious scale. Many could have tried to smash this lot of ideas and influences together and failed. Mussorgski doesn’t fail – far from it.

Mussorgski is Khorzon, a guitarist from Polish black metal band Arkona (not to be confused with the Russian/Slavic folk warblers of the same name). Now on his third album after apparently resurrecting the band five years ago, he combines deceptively austere synths with a glowing, interplanetary heaviness. Although black metal does not play a central part, Mussorgski undoubtedly has the genre’s ethos at its heart. The basic formula, as exemplified by the opening track, is a steadily rolling juggernaut of death metal with kick drums firing like howitzer barrages. Growling metal vocals alternate with a synthesised, baritone chant. And it’s all presented against the background of an irresistible, surging keyboards undercurrent that constantly threatens to engulf the album completely.

At a stab, I’d suggest trying to imagine the revolving hooks of Summoning, the rumbling death metal of Bolt Thrower, the confident experimental architecture of Rotting Christ and the loops of Kraftwerk – together with the frequent symphonic bombs lobbed into the middle. There’s more than a hint of funeral doom in all these heavily stylised arrangements and the cosmic vision. I’m sure some listening to Creatio Cosmicam Bestiae would be tempted to dismiss it all as lacking complexity. But, as with all the above bands, disregarding the apparently simple risks failing to see the sublime judgement at work.
Earth shifting tracks like God Is In The Neurons is where Mussorgski combines all of the above with saurian doom-death wrapped around lyrics delivered as simple tenets to sink into the sub consciousness. The thick layers of strings and electronic sounds – sometimes almost industrial in the way they splice and work with the music – emphasise the organic approach and the clever use, and confident overuse, of all its constituent elements — all with liberating results.

The effect is like listening to the beating heart of the cosmos or a giant, organic machine infecting your brain with the basic truths of existence. It’s also when the contemplative ambience begins to shine through the pounding heavy metal shell. God Is In The Neurons is a fine example of the art of Mussorgski and how one man projects can shine by using and abusing a powerful formula to a relentless degree. And, while only the second track, it would have served as an impressive finale for many other bands, exploding like a giant crescendo of sound. But Mussorgski tosses it in early with every confidence that there’s more to come.
The album’s darker middle section arrives with a black metal backbone and a gothic heart – from the searing highs of Sabbathum In Perpetuum to the pounding lows of Key To The Universe. But if you want your metal combined with ambient brilliance, then the final two or three tracks will be compulsive listening – all one sweeping, symphony and distilled into a final 8 minutes of sheer bliss.

Some might struggle to get past the obvious stumbling blocks – the repetition and the overly stylised production. It also has that almost indefinable quality of one man projects that, despite the experimentation and monolithic ambition, it stays almost rigidly within its own, self-imposed creative tramlines. But it’s also a compelling, almost poetic experience. Through the eight tracks, the album grows and dies like a pulsing, organic cosmos. Always fundamentally the same but also constantly changing, absorbing new elements. Then it gradually discards all those things one by one as it travels towards its inevitable conclusion – disappearing into a single point in space and time.

Some may not appreciate this album – but others will be blown away. Check out Mussorgski and look into the face of the universe.
[AVE NOCTUM]