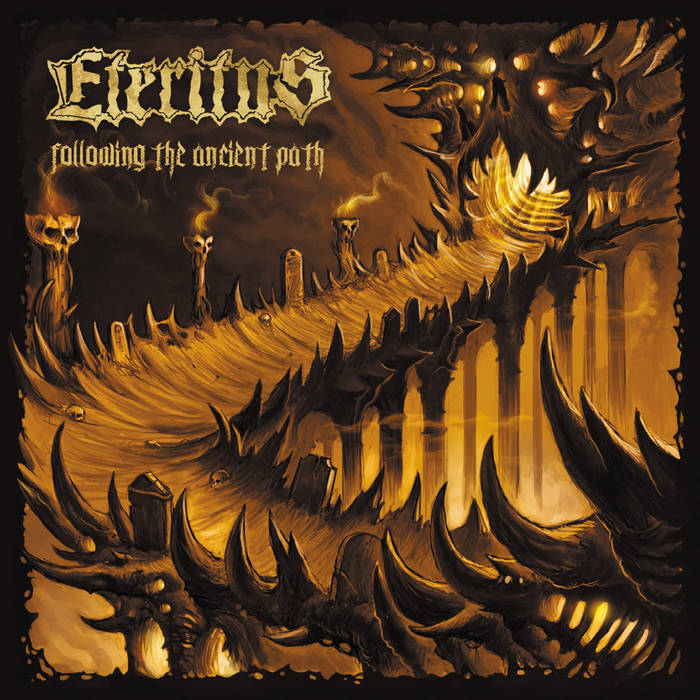 "A damn near flawless album of its genre front to back, “Following the Ancient Path” is a real punch to the face and I mean that in the best way possible. Eteritus have given us one hell of a ride that death metal fans everywhere are not going to want to pass up for even a moment."
headbangerreviews.wordpress.com

"At times the guitar riffing can be very melodic while the songs also bring in a great mixture of slow, mid paced and fast parts while some of the faster riffing often uses a decent amount of open note tremolo picking and all of the songs also remain very heavy from beginning to ending of the recording and all of the musical instruments have a very powerful sound to them."
extrememetalzine.blogspot.com

"This is old school death metal from Poland, using a similar font for their logo as Entombed and Fatalist, you kind of know what to expect on this debut album, but that’s just fine by me. There’s a cross between the UK (Benediction) and Swedish scene (name checked earlier) for me in the sound whilst the production is perfect, not too overdriven, but enough gnarl to shatter your foundations.
Song wise, there’s plenty of good stuff on offer, tempo variations, rabid solos and even some more melodic solos when you get to the closer ‘Mortal Prophecy’. Suffice to say, it is a consistent album, however I wouldn’t say there is a stand out track, but that’s pretty redeeming really as you get a full album experience without the need to skip to your would-be favourites. I like the artwork, the colour makes it stand out more, these black and white covers just merge into one album after another, and ‘Following the Ancient Path’ depicts some originality in its presentation even if musically you may try to compare this release to others. That’s a touch unfair, it’s not a copycat, but there is a lot of material like this out there. The fact that they are from Poland means that the sound has travelled further as you usually get homage to others styles of death metal from that nation.
All in all, ‘Following the Ancient Path’ is a solid death metal album. You won’t find any surprises, but you won’t find complacency either, it has a perfect balance. Presented in a slightly cleaner form of annihilation, Eteritus are a band to savour and watch for further development."
www.avenoctum.com

"Death metal has come a long way since the genre blasted into existence in the mid-eighties. Aided by labels like Roadrunner and Earache, the style quickly gained a lot of attention by fans and media. And as soon as death metal was born, in started evolving into doom-death, grindcore and, more recently, deathcore, amongst others. However, wherever there is evolution, there is recurrence. Wherever people are trying to renew something, there are others who like the whole thing just the way it was.
In that aspect, 'Following The Ancient Path' is the perfect title for this debut album. Polish growling combo Eteritus treat us to a decent slab of old school death metal. After a little intro, the quartet surely takes us back to those mid-eighties, reminding me of bands like Dismember, Obituary, Bolt Thrower and so on. Now, I have to mention that I wasn't so sure of this album when I listened to opener 'Biocentric', but with massive old school anthems like 'Hellish Imagery' and 'Incinerator' this act certainly convinced me.
The riffs are fierce, the drums are methodical and the vocals are brutal, turning tracks like 'The Unliving Thing' and the somewhat groovy 'Somber Mind' into death metal highlights. If these guys started this band about thirty years ago, they would be highly acclaimed pioneers in the genre. In that case, this album quite possibly would have become a classic, one of those albums you need if you call yourself a fan of death metal. Well, "fan of death metal", I suggest you get your hands on this album anyway, not because it's a classic but because it's a damn good one."
merchantsofair.com

"This year's news of Polish ETERITUS contains everything necessary for opening the door to the underworld. Moldy great riffs, morbid vocals and the atmosphere full of darkness make from this album some duty for all fans of real true death metal. The nineties of the last century come alive with full power once again. When I'm listening the world is dark, cold and evil. Welcome to the old school party. It will be served ancient procedures, pus and scab. The album has done well. It has a certain spark that makes it different from the hundreds similar. We are dust and to dust we will transform! If you fancy a big amount of scabies, "Following the Ancient Path" is for you more than a good album. Death metal record, which opens the lids of the old coffins! Great gravedigger job!"
deadly-storm.blogspot.com