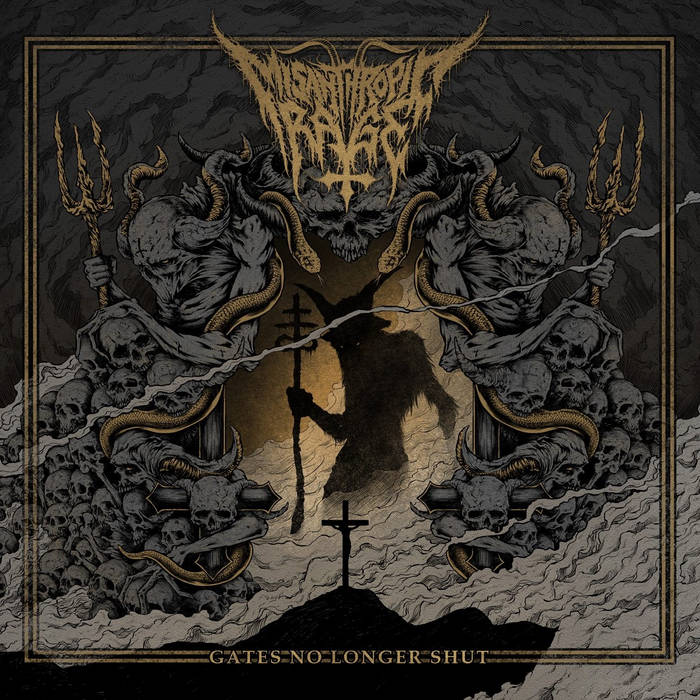 "And fire swept the earth. No, it’s not Enslaved but Poland’s Misanthropic Rage who cast all asunder with their avant-garde progressive metal. A dark, croaky voice echoes behind a full-out sound which bounces off walls, crunches buildings and creates expanses and big atmospheres. Frequent tempo changes are the order of the day, but Misanthropic Rage somehow manage to blend all embracing darkness and ghastly, industrial scenes with melancholic guitar passages. There’s continuity, which is the main thing and quite an achievement."
www.avenoctum.com

"Gates No Longer Shut is quite nonlinear in its songwriting, with no distinct verse/chorus structure or any kind of rigid structuring in place. The songs seem to unfold in an impromptu fashion, riffs unspooling from the hands of musicians in the midst of a creative uprising in the recording studio. A splintered jaggedness is prevalent in the music, angular melodies sharply cutting across to add a dim glow to the seedy mood spread throughout these seven songs."
www.heavymusichq.com

"MISANTHROPIC RAGE is a duo from Poland, playing… well, Black Metal. I am using this term very loosely here, simply because I don't have a clue how to call it. The production is slick and clean without being too polished, the vocals are varied and portray a whole variety of emotions, from disgust, depression and sorrow to rage and sheer hatred. The vocal range is impressive, let me tell you… it covers all territories between screams, shrieks and growls, and when the clean singing sets in, it's not far from Ozzy or Messiah Marcolin. No shit. All of this rides the sonic waves of the churning sea of Absu (if you know what I mean), and I'll be damned if this doesn't sound like MORBID ANGEL on a diet of Mephedrone and Benzodiazepines. It's hypnotic and psychedelic to the point of being unpleasant, neither really experimental nor "avantagarde", more the URFAUST school of Rock. In other words, hard to classify and even harder to listen to. But this is the beauty of forward thinking music: it challenges the listener."
www.voicesfromthedarkside.de

"If you read advance press about the album, you’ll see references to “avant-garde black metal” — which is fair enough, since “avant-garde” has become a phrase people (including me) tend to use when they can’t come up any other short phrase that captures what you hear. I’ll go further and say that for this album it’s a stretch even to claim that black metal is the predominant style. The music is a very distinctive blending of contrasting sounds, speeds, and moods; it’s dark and disorienting, sometimes depressive, sometimes deranged, but consistently fascinating and head-spinning. As you make your bewildered way through the album, you can begin to identify recurring ingredients, which collectively give Misanthropic Rage their own musical personality. In my case, I eventually became strongly addicted to them. The riffs and bass are rough and gritty with distortion, and the drummer periodically fires fusillades of militaristic booms and blasts. When they join forces in bursts of violence, they’re perfectly capable of throwing open the gates to vicious black storms or pavement-splitting demolition jobs. Intermingled with this ferocity, however, are lead guitar melodies and solos that are quite different. There’s something very weird and paranormal about the guitar tone and the reverberating melodies. At times they made me think of swirling ocean phosphorescence shining in the wake of a rushing destroyer. At other times, they seemed lilting, ephemeral, wistful, and dreamlike. At still others, they resemble the wailing of a phantasm."
www.nocleansinging.com