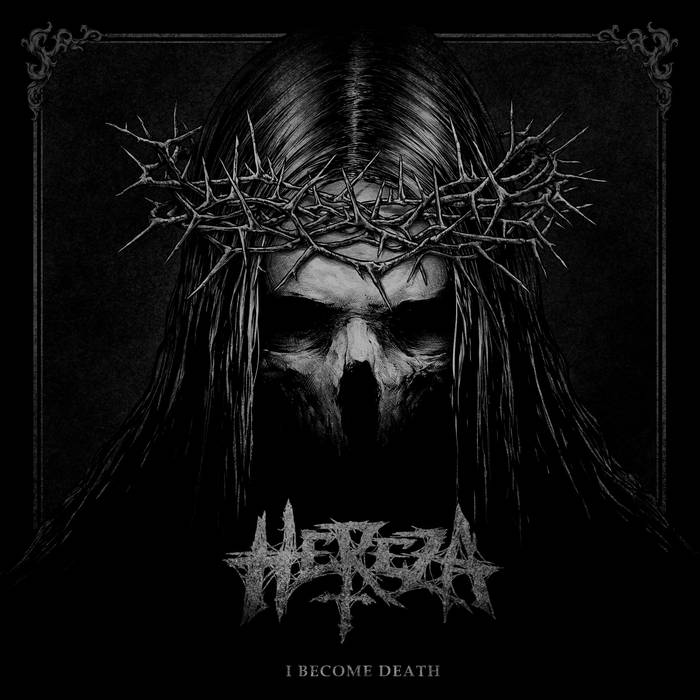 "It has also been a while since the last time when an album was able to make my neck hurt. Honestly, I Become Death is packed with those fantastic rhythmic riffs which make your head go up and down automatically. Its speed and agility is also Hereza's trademark and the drumming velocity and technique can leave you breathless. Literally. All the songs have also got this weird feistiness which certainly appeals to me. Combining so much aggression with something that is actually so engaging and captivating is a difficult job and I think that Hereza managed to master that skill. I Become Death is a highlight of what I mean about something so easy to get involved in. Absolutely perfect and immaculate!"
www.thegoattavern.net

"I Become Death is one turbocharged neck-breaker after another, with a vibrant production that enhances the visceral, electrifying power of the band’s onslaught. It’s an homage to the punk-influenced Swedish death metal of the early and mid-’90s, favoring speed as well as chainsawing guitars, maniacal vocal explosiveness, and bludgeoning, jackhammering grooves. Although the music’s core attractiveness lies in its full-bore destructiveness, HerezA don’t neglect melody. These are well-written songs that stick in your head every bit as effectively as they provide high-octane headbang fuel."
www.nocleansinging.com

"It seems that the very nature of a band like Hereza, with their suped-up Motorhead-meets-Entombed sound, is to play as hard and as relentlessly as possible ; but on I Become Death they not only do that and do it well, but they showcase murky layers of depth, teasing the listener with memorable ideas, before diving headfirst back into the abyss of raw, brutal death-punk. I Become Death is surely not for everyone, but for those that favor the intensities of the 90’s death metal scene, with more than just a little crust punk thrown in, Hereza might just be the band for you."
www.musicology.uk.com

“I Become Death is not the most unique of death metal albums I’ve heard, but the apocalyptic and end of the world feelings created throughout the ten cuts here make for a hellish listening affair. This is the style of death metal you listen to when you’re getting ready to fight someone, as it has plenty of pissed-off, aggressive moments, whereby you just want to kick some ass!"
www.explicitlyintense.com

"After listening to the extreme compositions by this Croatian bulldozer, your metallic senses will never be the same again."
theheadbangingmoose.wordpress.com

"What do you get on this album? Well, old school death metal, crushing guitars, a deep, growling voice (plus here and there a few punk screams) and mosh pit inducing tempos. From opener and title track 'I Become Death', these guys drags you into a whirlpool of distorted riffs and pummeling drums. That song reminds me of Dismember, which is probably the reason why I like this album so much. Yeah, I do, me, the one who stopped listening to death metal after the classics by Entombed, Sepultura, Death, Suffocation and the aforementioned Dismember. But what Hereza is currently blasting through my speakers, is the one album that drags me right back in. Fierce tempos, insane guitars and an immersive speed. You don't need anything else to start that blood-gushing death metal orgy."
www.merchantsofair.com

" HEREZA are coming up with the next CD full of shadows. It is raw, ugly, disgusting, dirty, brutal and terribly addictive. If you were, like me, once cursed with old school death metal, you will be very satisfied. It is going on an underground ceremony for the beatification the other world. When listening the world is to black, sad and cold, like pieces of ice. Turn all crosses! Call bad spirits. The album reminds me of a poem by Edgar Alan Poe. It is also sad, shrouded in mystery and madness. "I Become Death" is a record that bewitched me. It is full of pus, harsh melodies and morbid voice. Old school death metal that is pulling up the bloody roots of evil from the ground! Absolute and perfect inferno!"
deadly-storm.blogspot.cz