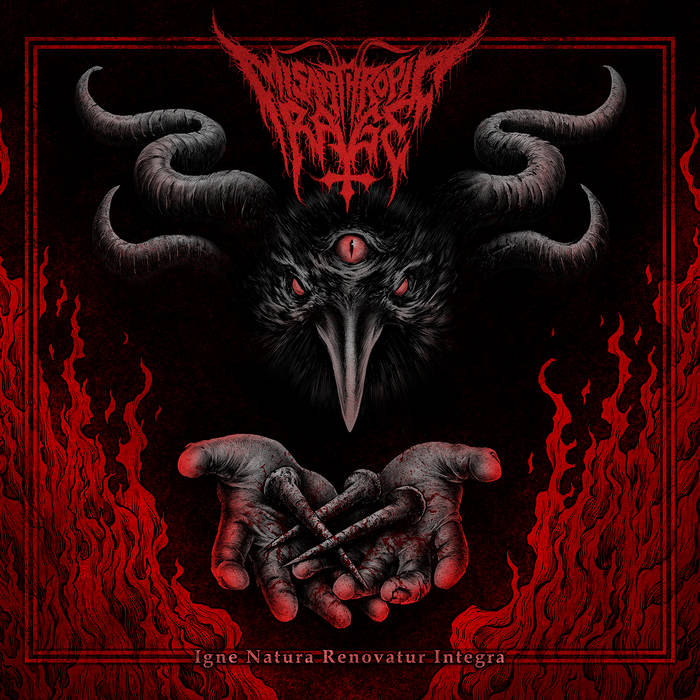 Ah yes, it’s been a hot minute since we premiered some quality black metal on Heavy Blog. It has really been a fantastic few years for the genre and it’s not looking to slow down. Misanthropic Rage are here to make sure of that. Their Igne Natura Renovatur Integra (“all of nature is renewed by fire”) is a blistering black metal assault, merging furious riffs with unique touches of epic guitar leads and solos and a progressive mindset that keeps everything varied and well lubricated. The result is a complex, engaging and oppressive album which channels well the penchant for the inhuman and massive that black metal has always been infected with. We’re honored to premiere the full thing right here; head on down below for your first taste!
As “Call All Your Angels” more than proves, Misanthropic Rage have no problems with being firmly rooted within the genre’s sound and experimenting with it when they see fit. The first half of the track is a slightly more straight-forward approach to the problem; fast riffs, shrieking vocals and an overall need for speed dominates the track’s opening segments. But the second half also features a more staccato riff, drawn right from progressive metal, and a frankly enchanting guitar solo. In case that prominence of guitar, quite uncharacteristic for the genre, comes off as a fluke, check out the second track, “Bliźni Mój”, which features a prominent lead that you definitely did not expect and a second, enthralling solo.
Other moments on the album follow the same pace; Misanthropic Rage have their own idea of what black metal sounds like and they’re not afraid to realize it in full. This makes Igne Natura Renovatur Integra an album that should last well in your rotation; it has ever unfolding layers and tones for you to play with.
www.heavyblogisheavy.com