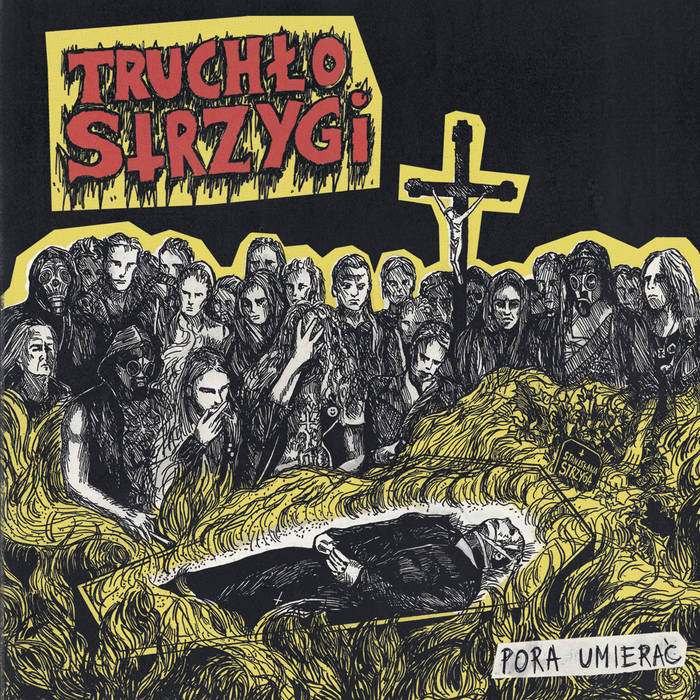 “Black and punk metal from Poland” is the minimalist description of this one. If it’s a case of take it or leave it, I’ll take it. Time to die – well, that’s what the title means. It sounds intriguing.

The start isn’t anything like the description, but that’s ok because it’s a neat ruse and the singer starts laughing. The band is introduced – I can’t remember any band ever doing that – and off we go into deathly punk. It’s deathly because Poles only do harsh vocals – well, metal musicians anyway.“Apokaliptyczny Młot (Obliteracja Poprzez Życie)” (Apocalyptic Hammer (Obliteration through Life) bounces along nicely and ends with some fearsome black doom. Seamlessly it runs into “Sadystyczny Masowy Mord” (Sadistic Mass Murder), which is another punk metal inspired riot. The vocals are like a Polish version of hardcore, but on it blasts in its vigorous but simple way with the occasional drunken chant, tempo changes and, impressively, an undercurrent of interesting guitar lines. A quiet and menacing bass section is the prelude to a final blast and chant. There’s the semblance of chaos but this is supremely controlled. It’s also great fun, and the band deserves great credit for transmitting such entertaining infectiousness.

“Tu Gdzie Czarna Zorza Płonie” (Here Where the Black Aurora Flames) is another song with a pulsating start and a creepy riff, which breaks down. The lads sing and chant manically. Enter the fast and hard section. It’s breathtaking stuff. Each song has its personality, swinging backwards and forwards, and suggesting a riot but you know where you with this. Ghoulish tones invade “Świat Pedzi Ku Przestrodze (Pradawne Demony)” (The World Rushes to a State of Warning (Ancient Demons) before a tribal drumbeat promises menace. It continues. I like the fact that the menace lingers before blending into a deadly hard passage. After this more traditional (in the loosest sense) ending, complete with pub-like singing, there’s a nice switch into the adrenaline rush hard punk of “Śmierć I Plomień” (Death and a Flame). Somehow I didn’t believe the melancholic beginning of “Busola do Nikąd” (Compass to Nothing), but again it spreads like a blooming flower and replete with controlled feedback, turns into an invasive song. The raucous, shouty vocalist makes sure it doesn’t get sentimental. As ever, this song is edgy and now shadowy. The customary off tune chorus has that hardcore edge. The punkishness of “Jestem (Żyję, Gnije, Umieram)” (I Am – I Live, I Rot, I Die) is then interrupted by the sound of people dying in pain. It cranks up but there’s a sense of foreboding, accentuated by a haunting chant and ringing guitar. One break later, the song explodes and drags us along at breakneck speed as the lads shout stuff in Polish. “Jestem (Żyję, Gnije, Umieram)” is testimony to the fact that Truchło Strzygí can change styles several times in one song while maintaining continuity. “Stary Kult Śmierci (Ozlocone Truchło) (Old Death Cult – Gilded Corpse) starts darkly. Black clouds rise as the tempo changes, and we are hit hard with a volley of punkish metal. But it’s played cleverly as in among the furious melodic assault, it’s moody, malevolent and manic. Clouds sweep in as the song slows down. There are ghastly screams, and just as I hoped the song and the album ends with galloping fury and eccentricity.

This is one of the best albums I’ve heard this year. “Pora Umierać” is raw but musically very clever. It radiates terrific fun but the musicianship is thoughtful, creative and dynamic. Na zdrowie!
www.avenoctum.com