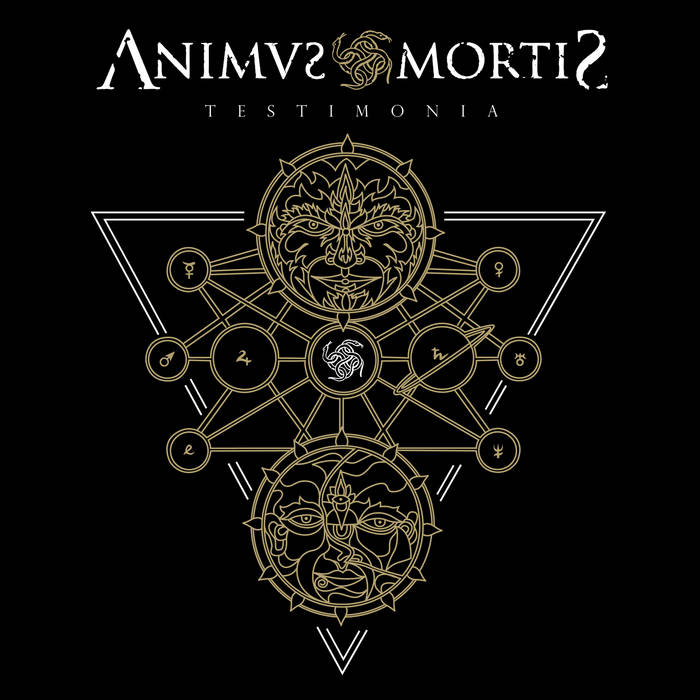 Recorded at Sonido Origen, mixed in Rubicon estudios and mastered by Tore Stjerna at Necromorbus studios.

Animus Mortis are a Chilean Black Metal band and this is their second album. This is an intriguing blend of Progressive and Post-Black Metal that lasts 40 minutes and makes a very good impression. It’s Black Metal for the modern age, taking influence from the aforementioned sub-genres to add to their Blackened pot, creating something unusual.
This sits nicely alongside albums from bands like Entropia, Thaw, Outre, Hope Drone, Tempel, Decline of the I, Wayfarer, Deafheaven and many others that play Black Metal with a non-standard spin on things. Bands such as these take up the mantle of Post-Black Metal, (willingly or not), to expand their musical horizons and add to their Blackened palette.
Chants, screams, growls and all manner of other vocalisations are used to great effect to provide a rich vocal performance. These are multifaceted and varied, allowing the singer ample avenues for exploration and experimentation. Wailing, shrieking and moaning torment appear to be his choicest methods of delivery; these are frequently layered on top of each other to create a nightmarish juxtaposition against the more resplendent music. I imagine it could be somewhat of an acquired taste for some people when confronted with his style, maybe rather preferring the more standard screams that appear less often.
The music is highly emotive and has an understated epic feel to it. It has a heart that’s twisted and warped though, kind of like Deathspell Omega with added Shoegaze. The music can be quite beautiful, with uplifting sections as well as parts that are more barbed and dangerous. The vocals supply the main ugliness and horror to the music, with the singer frequently sounding inhuman or possessed, adding a disturbing aura to the songs.
This is a compelling release due to the fact that it attempts to do something a little different from the norm and largely succeeds. The ubiquitous blast beats, the gleaming guitar melodies and the corrupted vocalisations all merge together to produce something greater than the sum of its parts.
This is music to become entranced by. Let Animus Mortis lift you up and help you explore the less-travelled paths that they wander. It may seem a daunting proposition, but it’s one that’s worth it.
- WONDERBOX METAL / wonderboxmetal.wordpress.com


Santiago, Chile’s Animus Mortis are on to something with Testimonia, their second album and first in six years. By that measure, they’re a rare black metal commodity who is purposely sideways and avant-garde, without taking the full-on whacked-out bait. As in, the songs that comprise of Testimonia have a quick, rather instant flair, whirl, whatever to them. It has more to do with what they don’t do than what they actually do, which frankly, isn’t all that out of bounds. But, the album is able to achieve marvelous pace by parlaying some seriously charming riffs, which always wins in the end.
Eschewing the fact the band is from Chile, Animus Mortis may have more to do with the fertile black metal ground of France than anything. Granted, they’re not as elaborate are utterly weird as Deathspell Omega or brazen as Blut Aus Nord, but found among harmonious cuts like excellent album opener “REM Manifesto” and its follow up, “Seven Decrees,” AM is able to grapple with the pointed, quasi-melodic riffs found between the above-mentioned pair as well as an atmospheric undertow that prevails right from the onset. Even the more straight-ahead, less flourished cuts like “Hyperbole of Senses” and the title track take up residence in vast, experimental fields without losing their identity.
An album perhaps best consumed on the whole, Testimonia positions Animus Mortis as an instant player in the atmospheric black metal derby. And really, since these guys are a notch down on the nutty BM scale, there’s a sort of inline route that connects them to the likes of 00’s-era Borknagar and even Viking-era Enslaved, two outfits who managed to beautifully weave the subtlety of atmosphere with the blanket elements of black metal. Now, Animus Mortis haven’t quite risen to such levels, but tack on a few more album like Testimonia, then they’re on their way. Highly recommended stuff.
- DEAD RHETORIC / deadrhetoric.com


At first glance, Testimonia sounds like it might be the sort of ritualistic black metal album that fits well with label mates Abesntia Lunae and channels through several mind-bending acts like the French legends Deathspell Omega. But while the grand artistry of progressive atmospheres mix in with tremolos, groove-thrash and even some death metal sections, there is actually a great deal of melody on the album that recalls the magic of shoegaze and all of its starry twinklings. The band manages to recall the style that made Deathspell Omega so great, yet with a thick guttural vocal approach and extravagant lead melodies that sound as if the heavens themselves are splitting open to exude radiance. The record in general focuses more on emotions, yet it does it in a hugely metaphysical style that may be seen to some as a sort of musical workbook in which they might be able to decipher the meanings behind some of the pieces. It’s a black metal record, but definitely a bit more melodic than the frozen hordes would approve of. Though in all actuality, I feel that some people should quit living in the late nineties and join us here in the current age where they will surely discover that the music itself hasn’t been diluted with these melodies and intriguing segues, but rather has been wholly affirmed. I’m still hearing a slew of drum blasts, I’m still hearing gargantuan amounts of tremolo riffs and I’m still sitting face to face with a harsh vocal utterance that doesn’t seem pleasant in any factor – but it’s all so damn beautiful and that’s what interests me the most and it’s where I began to feel that Testimonia stands out from the pack. Animus Mortis wanted to make a record that embodied the vibrations of meditation, which in my book proves that metal is doing things that few other genres would even consider these days and it’s mainly why I’ve stayed with it for so many years. Testimonia shows that metal is definitely taking its classical roots and evolving further with them, bringing about a sound that is undoubtedly the most intelligent of musical noises out there. Sure, there are pop stars loved the world over by clueless sheep aware of the marketing trend, but I’ve yet to hear Katy Perry or Lady Gaga write an entire album based on transcendental meditation. No, Animus Mortis is something far more and I am quite sure that black metal fans, avant-enthusiasts and even death metallers will meet at the same level here. I think that some people are actually a bit frightened of this kind of metal, feeling that it might be too far bathed in the blood of a dark ritual and perhaps they feel that something of maleficence could come in through it. But if that’s the case, then I’ll never run out of daemons to talk to as I’ve played several albums of the same ilk. But I think they hide, because if I ever see them, I’ll be doing an interview with each of them in the next few minutes. Testimonia is definitely the kind of dark meditation ritual that you don’t want to miss out on this year. I’m almost certain that those who grab it will want to soak it all in almost immediately.
- NEW NOISE MAGAZINE / newnoisemagazine.com

Guests include Kassa Overall and Muriel Grossman, plus an LP of the week by Van Hunt.